Seedhe Maut, Sez On The Beat 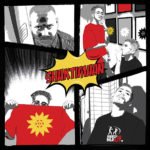 The first single of our upcoming debut album, Shaktimaan. Produced by Sez On The Beat, the song is a fiery declaration of the frustrations and power of the common man, riffing of the metaphor expressed in the cult Indian TV series of the same name. Directed by CanFuse, the video is based around the character of a demotivated bank employee looking to get ahead of his abusive bosses.